I mentioned I’d do a blog on a local castle near where I live that is supposed to be one of the most haunted castles in the world. I’ll cover its history as well as some stories on hauntings, some of which are well documented, some of which I’ve heard from friends/family. There might be a bit of humour here and there because I’m a complete goofball and can’t resist, but I’ll try to keep it minimum. Also some of it may not make sense if you’re not from Ireland, but bear with me. If you hear about me talking about ‘families’, I’m just referring to powerful Irish clans of the time.

The History of the Castle

Charleville Castle is located in the County of Offaly which is located in the midlands of Ireland. It borders the town of Tullamore near the River Shannon. It is situated in Ireland’s most primordial oak woods (whatever that means) and was once the haunting grounds of Irelands druids (whoever they were). The Oak forest that the castle is situated in was once part of an estate which began to be assembled following a gift of 1700 acres to the Moore family, made in 1577 by Queen Elizabeth I.

A member of the Moore family was raised to the Earldom of Charleville. This title lapsed in 1764 due to the lack of heirs in the direct male line. The lands were then inherited by the six month old infant Charles William Bury. Bury was made Baron Tullamoore (as it was called back then) in 1797. Due to his wealth he planned a castle to be built near Tullamoore.

The castle grew from paper doodles in early 1798(Yes they even had doodling back then) into grandiose plans by the end of that very year. The castle was built by Charles William Bury, the Earl of Charleville (1764-1835) under the inspiration of his artistic partner, Lady Catherine Marie Charleville. It was designed by Francis Johnston who was one of the leading architects of his day and who also built the GPO (General Post Office) and The Chapel Royale in Dublin. Charleville Castle is considered one of the finest examples of Gothic-revival architecture in the country (of Ireland). The soldier fortress look was created in celebration of victory over the third French revolutionary expedition to Ireland. This was the first decisive victory by Britain over the revolutionary republican movement. It took fourteen years to complete the Gothic Castle (that’s Irish builders for ya…). 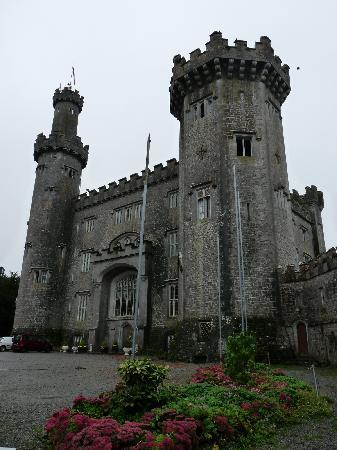 The distinctive features of the castle are the architecture, especially the ceilings. The ceiling in the dining room was designed by William Morris in the 1890s. He was a well-known stencil artist at the time. After the castle was completed Bury was raised to the now restored Earldom of Charleville, as first Earl of the Second Creation, in 1806.

In 1833, Tullamore was recognised as the County town of Kings County( now known as County Offaly) due to its expansion in population and wealth owed to being a terminus of the Grand Canal (which I take walks by regularly). It replaced Phillipstown (now known as Daingean) as County Town.

The Charleville estate expanded to about 24, 0000 acres at its Zenith.

The Earldom lapsed again due to a lack of heirs in 1885 with the estate passing to the ownership of a niece known as Lady Emily.

Once Lady Emily married, her family took the name Howard-Bury in order to comply with terms in the title deeds of the estate that they seemed due to inherit. Colonel Charles Kenneth Howard-Bury was a son of this family and was famous for being an explorer and amateur botanist in the Himalayas. He had twice escaped from prison war camps during the Great War. He was recognised as an explorer, linguist and diplomatist to be appointed leader of the first expedition which set out to climb Mount Everest in 1920-1921. He later won a seat in the House of Commons (Irish Parliament).

Although the colonel Howard-Bury inherited the castle on his mother’s death in 1931, It was left with only a nominal caretaker staff, due to the fact that Colonel Howard-Bury had also inherited the more manageable Belvadere estate near Mullingar in County Westmeath(Damn you, Westmeath!!!). In later years he also spent time on an estate he had purchased in North Africa.

The castle was uninhabited until 1912 due to the difficulties of the Irish war of Independence and the years of economic difficulty. The roof was removed in 1968(roofs are overrated). It had become a part of ‘vanishing Ireland’ until finally work on its restoration was commenced by Michael McMullen in 1971 and later by Constance Heavy-Seaquist(what a name!) and Bonnie Vance.

Nowadays the Castle is run by ‘Charleville Heritage Trust’.

The castle is reputed to be haunted by a little girl named Harriet who was the youngest daughter of the third Earl of Charleville. She died tragically in the main staircase of the building at the age of 8 in April 1861. Her presence has been reported by many people who have been in the castle. They have reported hearing her sing in the middle of the night, laughing and screaming. Some people think they have caught her on cameras as they can see shadows or mists on the pictures they took within the castle. Others report to seeing a little girl with a blue and white dress, with golden blue ribbons in her hair. Sometimes she is in the company of a small boy.

I have heard speculation that she is in fact a residual ghost and relives the moment where she died over and over (that may not be true though).

I have also heard stories of piano music coming from inside the castle (Could have been someone just playing the piano though).

As with most hauntings, the hauntings in Charleville mostly manifest themselves in the form of sound. These sounds include children running and screaming. The current residents of the castle have stated that they didn’t know what the sounds were until they realised that the room they were coming from used to be a nursery. There are also reports of sounds of children crying in different bedrooms throughout the castle.

It is also thought that there is poltergeist behaviour in the castle in the forms of slamming doors, flicking light switches on and off and flushing toilets (even ghosts need to go.) There are also reports of furniture being dragged.

Another story involving Harriet is that the current owners son was found lying at the bottom of the stairwell (as if he had fallen from the stairwell as Harriet did), however when he was approached he said he was alright because the little girl held his hand (referring to Harriet).

The Castle owner’s mother has also experienced hauntings in her bedroom at night where she saw two men, one with a red coat and one with a green coat. She later realised that these men were actually Francis Johnston (the architect) and Charles William Bury (former owner) after recognising them in portraits.

She also encountered druid-like figures in her bedroom at night approaching her as she lay in bed, stretching their arms towards her before eventually fading away. The grounds used to contain druids, monks and masons at one time or another, so it is not known which of these factions these ghosts originate from.

There are also reports of sightings of men from a different century drinking together and having a good time in the castle (partying like ‘twas 1799).

It is reported that most of the ghosts found haunting the castles are friendly ghosts, however they do like to play tricks on skeptics (people who don’t believe in paranormal activity. Like me).

That concludes this blog. I hope it was interesting and readable.

There is another castle in Ireland which is supposed to have some kind of twisted creature haunting it. I can do a blog on that as well if anyone is interested.

Thanks Kris.  Sorry I missed your pm. I was watching a movie and forgot to log out lol.